Warning: "continue" targeting switch is equivalent to "break". Did you mean to use "continue 2"? in /homepages/3/d513639738/htdocs/khmereducator.org/wp-content/plugins/qtranslate-x/qtranslate_frontend.php on line 507
 The power to inspire others | ខ្មែរអ្នកអប់រំ 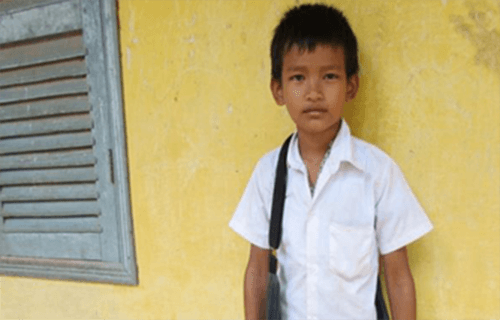 The power to inspire others

Ten-year-old Samphors is an orphan from Trapaing Tasek village in the province of Kampot, Cambodia. His father left the country to work as a fruit picker in Thailand a few years ago, and his mother, who worked as a housemaid in Malaysia, died when Samphors was only six.

Samphors was terrified of going to school. Without a caring family to encourage him, he lived a painful existence: “I did not go to school because I was scared of the teachers. Other students beat me. I didn’t have a backpack to go to school.”

In January 2015, Samphors received a scholarship package from the Cambodian Consortium for Out of School Children (CCOSC) led by Aide et Action (AEA) and implemented by the Cambodian Organization for Children and Development (COCD) which works with poor and remote children in Kampot. He was not only provided with a backpack but also books, pens, pencils, a pencil sharpener, a ruler, an eraser, a box of dry-erase markers, a whiteboard, a pair of shoes and a belt. Due to his situation, he also qualified to receive a financial contribution of 12,000 riel per month (about 3 USD).

As a result of the support, Samphors is currently in first grade at Baniev Primary School in Chhouk district of Kampot. “Presently, he attends school regularly,” explains Sarin Tey, COCD programme officer. “He is a good student, if we compare him with other children in his class. He has good results.”