Warning: "continue" targeting switch is equivalent to "break". Did you mean to use "continue 2"? in /homepages/3/d513639738/htdocs/khmereducator.org/wp-content/plugins/qtranslate-x/qtranslate_frontend.php on line 507
 School: A new hope for Oudom | ខ្មែរអ្នកអប់រំ 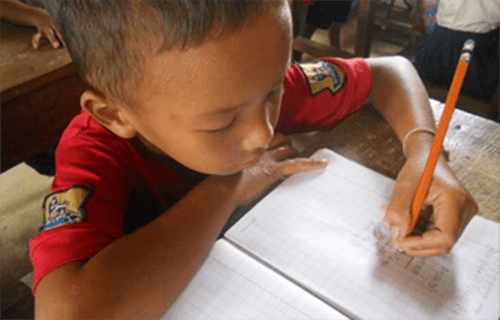 School: A new hope for Oudom

Oudom, an 8-year old child, is not as healthy as other children. He has had a case of chronic malnutrition since he was born. In addition, he has been an orphan from a very early age. His mother passed away when he was only 5 months old, followed two years later by his father. Today, he lives in poor conditions with his grandmother, Mrs Phok Sen, in the village of Prey Moul which is located 25 km from Kampong Chhnang. Mrs Sen can earn from USD 0.5 to USD 1 per day by harvesting rice for her neighbours in the rainy season, and by collecting fire wood to sell in the dry season.

As a young child, Oudom was used to staying with his grandmother while she was working. At 5 years old, he joined the kindergarten class of Prey Moul primary school. At first, he was not familiar with the school environment. He kept silent and did not talk to anyone, not even his teacher. However, only after three months, Oudom started to talk and interact with other students and participated in some class activities.