Warning: "continue" targeting switch is equivalent to "break". Did you mean to use "continue 2"? in /homepages/3/d513639738/htdocs/khmereducator.org/wp-content/plugins/qtranslate-x/qtranslate_frontend.php on line 507
 Saniya’s self-reliance and independence | ខ្មែរអ្នកអប់រំ 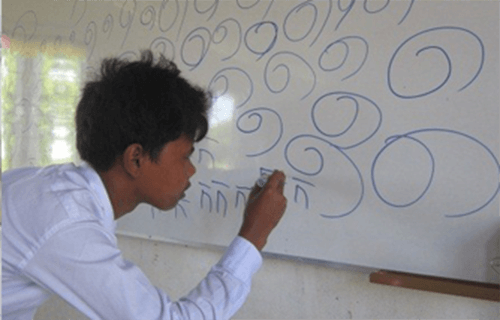 “A long time ago, Saniya went to school, but he could not learn well because he did not have teachers who were specifically trained to teach children with disabilities. It was for this reason he dropped out of school,” says Sim Tha about his son Sanyia who has an intellectual disability.

Saniya faced serious behavioural problems at school, in the community and at home. Although he wanted to, he could not help with household tasks. He was often in an angry or unreasonable mood. As he could not work out the difference between dirty and clean clothes, he always needed support from family members for his self-care.

In addition, Sanyia had problems socialising with others and allowing others to socialise with him.“He didn’t like playing and he could not make any friends. He would sit by himself and play alone,” says his father.“I felt embarrassed because I had a child with a disability. Some children did not want to play with him. He was discriminated by the community.”