Warning: "continue" targeting switch is equivalent to "break". Did you mean to use "continue 2"? in /homepages/3/d513639738/htdocs/khmereducator.org/wp-content/plugins/qtranslate-x/qtranslate_frontend.php on line 507
 Learning at an accelerated pace | ខ្មែរអ្នកអប់រំ 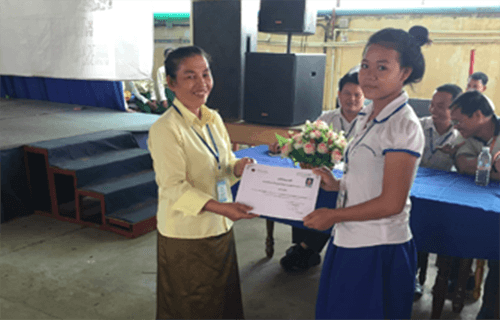 Learning at an accelerated pace

Kong Sreynoeurn, 15 years old, lives in a poor family near the dumpsite of Steung Meanchey. Three years ago, she had to take care of her mother who had cancer, while her father was an alcoholic and violent. She dropped out of school. “I didn’t feel I could study when my family situation was so difficult. I often went scavenging with my friends,” she says. A few months later, her mother passed away.

Sreynoeurn wanted to go back to school and she thought it was not impossible. “I was 13 years old and I could not read. How could I return to school?” she explains. She contacted the NGO Pour un Sourire d’Enfant (PSE) and had the opportunity to attend Accelerated Learning Classes in the 2013-2014 academic year. The classes were equivalent to grades 1 and 2.